When we started farming, we had to learn all kinds of new terminology. Every industry has its own jargon and farming is no different. After 8 years, sometimes I still don't know what more experienced farmers are talking about until I ask or look it up, especially if it applies more to large farms with big tractors and specialized equipment that we don't use. I won't tell you how old this city girl was before I understood that a 'cultivator' is a piece of equipment that you use to weed a field. (That is what that means, right?) 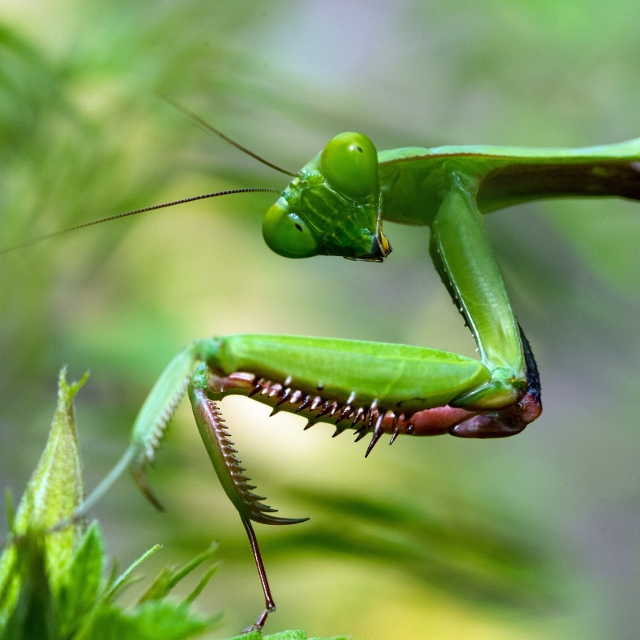 Oh look at me! I'm a preying mantis!!

Those farm kids who were my acquaintances at school would say things about the gilts farrowing and the calf having scours and I had no clue what they were talking about. FFA and 4H were mysterious secret societies only for people who grew up knowing the farm lingo and owned a pair of cowboy boots.

I've tried to keep a beginner's perspective when I talk to people about what we do. It isn't the best feeling to nod and act like you know what a person is talking about when you really have no idea at all. If I ever confuse you with terms like buck, doe, and wether when I talk about my goats, please don't be afraid to ask for clarification. (Bucks are the daddies, does are the moms, and wethers are the castrated males. We castrate them so they don't get the wrong girls pregnant at the wrong time, and because we only need to keep one breeding male at a time. I don't need to define castration, do I?)

When we first started raising chickens, we had a small flock that would lay eggs for us and a handful of other people. There are many breeds of chickens, and we were just learning about their differences. Some are heritage breeds (similar to your purebred dog breeds), and some are hybrids (think Goldendoodle). Some are better at laying eggs and some are better at growing muscular quickly (think of the differences in sizes and shapes and personalities of the dog breeds).

When we started raising one breed of chickens for eggs and another for meat, we distinguished between the two by calling them 'the layers' and 'the meat birds.' After awhile we realized that "meat bird" wasn't exactly a standard term, so we started calling the meat birds by the name other farmers were using: broilers.

A curious member recently asked about the word 'broiler' in a recent email. I wanted to slap myself in the forehead because I had broken my own rule about not using farmer lingo. Your average whole chicken from the grocery store is a broiler (sometimes called a fryer). Both terms refer to a young chicken raised for meat. According to some websites, the size of the bird determines whether it is a broiler or a fryer. Technically ours are probably in the larger fryer category, but the USDA updated their definitions in 2014 and doesn't distinguish between the two.

So there you have it. Broilers are chickens that are raised for their meat. Meat birds, if you will. Anything else are we saying that's confusing?